What Do We Do

Our Health Genomics is one of the most unique panels devised to optimize the overall health and wellness of people using gene-based personalized nutrition. The Health Genomics tests 180 crucial genes involved in the biological processes associated directly or indirectly with the onset of chronic diseases. This includes genes of the enzymes and biological component playing the role as a key factor in cholesterol metabolism, methylation, detoxification, oxidative stress, inflammation, insulin resistance, bone health, and iron metabolism respectively.

The results obtained from the test panel will help in providing you a detailed personalized recommendation which will include the following:

A rigorous selection process is utilized when selecting genes for the test; only the most scientifically relevant genes are considered, and only those where a lifestyle intervention can modify the effect of the gene, are included. As research into the metabolic areas continues, and the body of evidence supporting the role of additional genes in the disease process is developed, new genes will continue to be added to the test.

The occurrence of gluten intolerance in the Finnish population has doubled in the past twenty years. According to researchers, gluten intolerance may often be symptom-free, and people may be unaware that they have the condition if their symptoms are mild or atypical. Three out of four people with gluten intolerance have not been diagnosed, which also means that they are as yet going without treatment.

People with non-celiac wheat sensitivity have a weakened intestinal barrier, which leads to a systemic immune response after ingesting wheat and related cereals, new research confirms.

Researchers have found that taking an enzyme tablet while consuming foods containing gluten prevents a significant amount of it from entering the small intestine. This could enable gluten-sensitive patients to ingest small quantities of gluten without experiencing symptoms, such as bloating, diarrhea and abdominal pain.

Diabetes in your DNA? Scientists zero in on the genetic signature of risk

Many genetic mutations have been linked to type 2 diabetes, but no clear genetic signature has emerged. Now, new results may explain how multiple genetic flaws can lead to the same disease: They seem to change the way certain cells in the pancreas ‘read’ their genes.

Scientists are closer to understanding the genetic causes of type 2 diabetes by identifying 111 new chromosome locations (‘loci’) on the human genome that indicate susceptibility to the disease, according to a new study.

The genes that increase the risk of Type 1 diabetes have lost their hiding place, scientists report. A research group has located and narrowed down the number of genes that play a role in the disease, according to their study. Knowing the identities and location of causative genes is a crucial development: Other researchers can use this information to better predict who might develop Type 1 diabetes and how to prevent it.

New research from a large international team of scientists offers a more complete picture of the genes responsible for type 2 diabetes, demonstrating that previously identified common alleles shared by many in the world are the biggest culprits — not the less common variants some scientists had hypothesized might play a large role in who gets the disease.

Why Do Women Store Fat Differently From Men?

It’s a paradox that has flummoxed women for generations — their apparent ability to store fat more efficiently than men, despite eating proportionally fewer calories. While it has long been suspected that female sex hormones are responsible, a new research review has for the first time drawn a link between one hormone — estrogen — and its impact on fat storage for childbearing.

This is your brain on estrogen

It’s no secret that women often gain weight as they get older. The sex hormone estrogen has an important, if underappreciated, role to play in those burgeoning waistlines. Now, researchers have traced those hormonal effects on metabolism to different parts of the brain. The findings may lead to the development of highly selective hormone replacement therapies that could be used to combat obesity or infertility in women without the risks for heart disease and breast cancer, the researchers say.

Estrogen in birth control pills has a negative impact on fish

New research shows that hormones found in birth control pills alter the genes in fish, which can cause changes in their behavior.

Scientists have discovered that the hormone estrogen plays a pivotal role in how the brain processes sounds.

The health of children’s bones could be determined before they are born, a new study has shown.

Another reason to exercise: Burning bone fat a key to better bone health

It’s a fat-burning secret anyone interested in bone health should know. For the first time, researchers show that exercising burns the fat found within the bone marrow and offers evidence that this process improves bone quality and the amount of bone in a matter of weeks.

Women at the highest genetic risk for fracture benefit the most from hormone therapy, according to a first-of-its-kind study.

Exercise, particularly high-impact activity, builds stronger bones in children, even for those who carry genetic variants that predispose them to bone weakness, according to new research. The scientists say their findings underscore that genetics does not necessarily equate to destiny, and reinforce the importance of physical activity as a key factor to improve the bone health of children in the present and into later life.

Genetic mutations in an enzyme related to amino acid metabolism called MTHFR and coagulation protein Factor V appear to have a significant association with blood clots and tissue injury to the placenta and developing baby, researchers from the University of Pittsburgh’s department of obstetrics, gynecology and reproductive sciences report. “This indicates a possible genetic predisposition to a condition of real clinical consequence regarding intrauterine growth restriction, preeclampsia, and spontaneous preterm birth,” the researchers say.

Medical researchers have identified a gene with mutations that cause febrile seizures and contribute to a severe form of epilepsy known as a Dravet syndrome in some of the most vulnerable patients — infants 6 months and younger.

Good News In Our DNA: Defects You Can Fix With Vitamins And Minerals

As DNA sequencing becomes cheaper, it will become common for people to have their complete genomes sequenced. Personal genomes will not only tell people about genetic susceptibility to cancer and heart disease but will also tell them which vitamins and how much can improve their health. A new study shows that one enzyme can be tuned up with vitamins, suggesting that one day we all may take personalized vitamin supplements.

Concentrated chemicals derived from green tea dramatically boosted production of a group of key detoxification enzymes in people with low levels of these beneficial proteins, according to new research.

Daily consumption of a half cup of broccoli sprout beverage produced rapid, significant and sustained higher levels of excretion of benzene, a known human carcinogen, and acrolein, a lung irritant, in a trial involving nearly 300 Chinese men and women living in one of China’s most polluted regions.

I took the Weight Loss test from genetic Healing. I happened to find you on the internet when I was desperately looking for an easy and sure shot way of losing weight after failing on many other fronts, like diet + gym, protein diet + ayurvedic medicines, and gym (with a trainer) and diet. Using all of these methods, I did lose weight, however, the weight loss came with a new health issue every time. This changed my focus on the health issue. Due to changed focus, I gained weight again.

The Weight Loss test I took was more out of curiosity as to how my genes affected my weight. The process was smooth and professional. The dietician assigned to me explained about my genes and their effects. This explained why I remained overweight and why I had a tendency to gain weight. She gave me a diet plan suiting my lifestyle and it worked wonders for me! I started losing weight with little efforts on diet control and she continuously encouraged me and changed the diet plan as needed, which helped me further to continue the weight loss.

Also other associated parameters improved with time and weight loss. I lost 14 kgs in just 6 months which I believe wouldn’t have been possible with other methods. I was not on any fad diet and was enjoying my health too. I have set my goals for the year 2017 and I am sure that with knowledge about my genes, I will achieve them. Thanks a lot, Genetic Healing.

I’d like to add that the vast majority of people are really unaware that such a technology and tests exist. Also the dieticians in hospitals and health clubs and gym are not aware of this. Surprisingly enough, many doctors are unaware of this field which I believe is a foolproof way to achieving long lasting health. I can say this is a breakthrough and cutting edge technology available for health improvement and should reach as many people as possible for them to reap the fruits of this insight.

It's a wonderful experience and i loved it. I have lot of difference in my weight .

Nutrigenomics was a wonderful experience for me, having many complex health issues like overweight my weight from 84 kg since last 4 years and not reduced after many efforts bally fat was always making me uncomfortable and affecting my look and working lifestyle due to dyspnea, having Type 2 diabetes and insulin intake 20 unit in before breakfast and 16 unit before dinner, which is reduced at 14 unit in before breakfast and 12 unit before dinner. I reduced weight around 76 kg. Having managed lifestyle and implementing the diet, exercise as advised by diet counselor. I strongly recommending Nutrigenomics for all.

The test is aimed at patients who might have a predisposition to lifestyle diseases due to the presence of one or more genetic risk factors. Identifying both favourable and less favourable gene variants, the test aims to maximize human health and wellbeing, by enabling you to make well-informed dietary and lifestyle choices.

Genetic Healing is one of the pioneer companies in India, working to makes lives better using genes based personalised nutrition. The main backbone of our high end services is the expert team we house. With years of experience in the field of Nutrigenomics, our experts – 180Dr. Geeta Dharmatti and Dr. R.D. Dixit are guiding the path to provide robust health and wellness services across the country.

How Does It Work

Our genetic test involves a simple saliva or blood test. For this, you can choose to either visit our center or share your address with us to undertake doorstep delivery of the sample collection kits. The sample collection process is very easy; you just need to follow the basic steps mentioned on the kit. Once the sample is collected it is taken back to our lab and processed further. The results take a few weeks after which a detailed genetic report is prepared by our team. The report explains your diet plan and lifestyle modifications, which are followed by counselling by our experts. 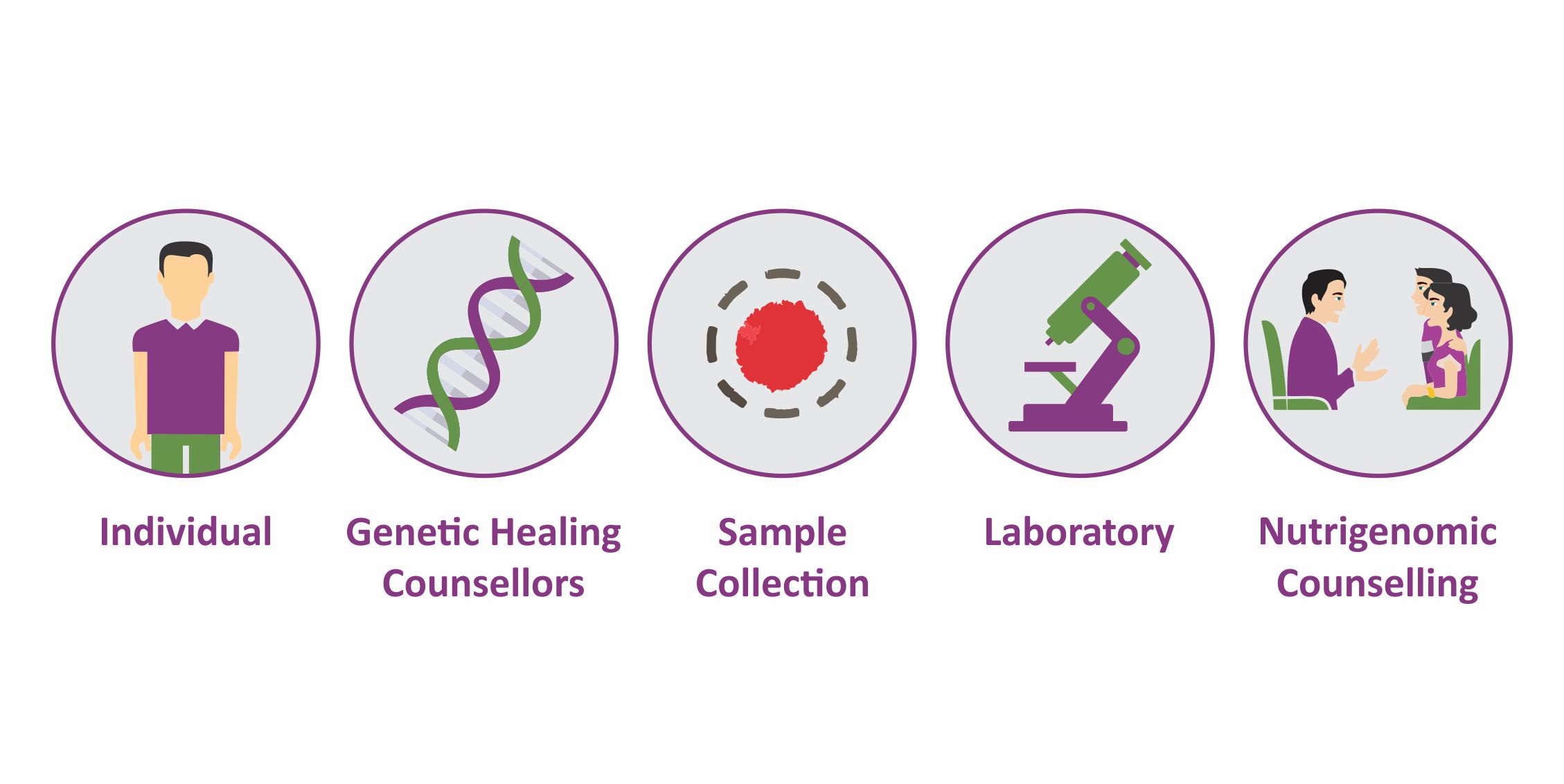 Unlock the potential of information hidden in your genes. Talk to our experts and understand how gene-based personalized nutrition, diet, and fitness regimen help in bringing long-lasting change.